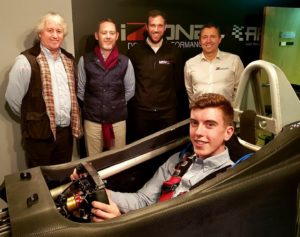 Winning a Champion of Brands round earlier in the year allowed me to qualify for James Becketts Mazda Road to Indy shootout. This shootout took place at Izone, a centre designed to test and evaluate your fitness, media skills and driving ability. I was up against 5 other formula ford drivers as we took on specific challenges designed to test our abilities both in and out of the car.

We spent 1 hour each in the specially designed gym at Izone testing everything from reaction time to strength and concentration levels. These challenges were designed to push us to the limit in an attempt to see who out of the 6 drivers really had the burning desire inside to pull through and come out on top. I scored top on the reaction board and more than held my own on the fitness and strength side of the challenge.

Up next was an informal interview which was used to learn more about our previous racing experience, ability to work in a team and also our ability to represent a brand or organisation well. I scored very highly on all three of these aspects and impressed the panel with my achievements in the sport given the small amount of time I have been competing.

Finally we were put in the Izone simulator and given 16 laps in a Formula Ford around the Indianapolis Road Course and then 16 laps in a Formula 3 car around the same circuit which was designed to test our ability to adapt to a new car. I comfortably set the fastest lap in both cars and also was the most consistent driver over the 16 laps. Alongside driving we were asked questions on certain laps which were designed to test our spare mental capacity whilst trying to match our quickest time. I also scored highest on this as my lap time hardly dropped away which impressed the judges.

At the end of the tests it was announced I had won and secured my place in the Mazda Road to Indy Shootout which takes place in Phoenix Arizona on the 9-10th of December this year. I am extremely grateful to James Beckett and Mazda Motorsport for this opportunity and will be working non stop to make sure I am as prepared as possible for this shootout.