The Mazda Road to Indy Shootout took place in Phoenix, Arizona on the 8th, 9th and 10th of December at the Bondurant Racing School.
The Shootout began on Friday evening as all participants and family where invited to a dinner held at the hotel as an opportunity to meet all the judges and event organisers. This was a great opportunity to make a good first impression on not only the judges but also fellow participants, the dinner was fantastic and gave us a taster on just what the judges and organisers where looking for from us as drivers both in and out of the car over the weekend.

Saturday began early with the bus leaving for the circuit at 6am, this would be the last time we were allowed to see our family until around 10:30 that evening after another dinner put on by Mazda.
I was put into group 1 alongside fellow Scot Ross Martin, Niall Murray from Ireland and Olin Galli from Brazil. Each group had 4 separate cars each with our allocated set of tires on, it was our job to ensure our tires where on the correct car for the correct session.

Session 1 was all about learning the circuit and how the car handled, the cars we were driving where like nothing I had ever sat in, with slick tires and wings they were much faster than my Formula Ford and also much smaller which proved a massive problem as i had to abandon this session as I could not fit in the car well enough to drive. After the session it was decided that the only way i was going to fit in the car was to take the seat out completely, this meant I was sitting on the floor of the car which proved to be uncomfortable at the best of times.

Session 2 was a large improvement as I finally was able to fit in and drive the car. Without any lap timer allowed in the car it was hard to judge how I compared towards the rest of the drivers but as the session progressed I began to feel more and more at home in the car and on this challenging circuit.

The final 20 minute session of the day was undoubtably my best session, I was now fully up to speed in the car and was feeling more confident after hearing the judges thoughts after the first two sessions of the day. We were sent out at 6 second intervals and during this 20 minute session I managed to close the gap to the car in front and then drop back to around a 4 second gap and then close back up again. Unfortunately with around 5 minutes to go in the session my car began to lack power and I had to park it in pit lane, This ended my first day on track early but I was more than happy with the progress I had made throughout the day and the judges seemed just as pleased as I was.

The Saturday night dinner was a very casual affair as we all mingled back at the hotel and discussed how amazing it was to actual be taking part in this event put on by Mazda Motorsport. After having dinner and speaking the the judges we were allowed some free time to chill out after a very hectic day at the track and also to catch up with our families to let them know how it had gone.

Day 2 of the Shootout was make or break in terms of getting into the final 5, another early start and bus ride took us to the circuit where we all got suited and booted into our race gear for the final time. It was announced just before session 1 that all the cars and groups had been mixed up. This benefitted some more than others and unfortunately cost me a chance to get into the final 5. I was now placed into group 3 and informed that the session times had been slashed down to 12 minutes instead of the original 20. Unfortunately I only managed 4 laps before having to park the car in pit lane and climb out as the car had developed a serious gearbox issue on both up shifts and down shifts.

This was the end of my weekend after being unable to show my speed again on Sunday morning due to car problems I was not selected for the final 5 Shootout. Despite not making it into the final 5 I was still proud to have gotten this far and to have been given the opportunity to compare myself against champions from all around the world and show why I was selected to represent James Beckett’s Super series Shootout.

The opportunity that Mazda, Cooper Tires and Anderson promotions gave all us young drivers that where at the shootout is incredible and something I am very thankful for, despite coming up short of the scholarship it still provides hope for me as a driver that it is still possible to progress up the ladder and reach the top.

A huge thank you is in order to everyone who has supported me this season and on route to the shootout! Its been an incredible journey and I am humbled by the amount of support I received in the weeks leading up to to the Shootout.
Its now time to work harder than ever for 2018 and bounce back stronger. 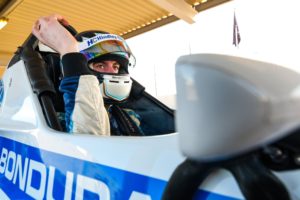