Rollercoaster of a weekend at Outlon Park

Qualifying was a great start to the day as I managed to put the car P5 on the grid despite losing my fastest time for track limits and being blocked on my second fastest into the last chicane.

Race 1 started well as I climbed up to P3 by turn 2 and was running with the leaders until a small mistake into the last corner lost me momentum and a position into turn 1, later that lap 2 cars infront had contact and when one rejoined I lost time and another position. After that however I was on the attack, the speed I had in the car was mighty as we battled to get back to P3, unfortunately I made contact with the car ahead when they slowed early for the first chicane ending my race early with broken suspension.

This meant I started Race 2 from P27 on the grid and after a few laps I had fought my way back up to P8 setting the 2nd fastest lap at the time despite being in traffic, unfortunately we were involved in another incident when 2 cars spun infront and I took to the grass to avoid them, this punctured my tire and bent the rear suspension so again I had to retire

Overall it was a hugely frustrating weekend as I lost valuable points in the championship due to things that were out of my control.

Huge thank you to everyone at Cliff Dempsey Racing for repairing the car in time for race 2 and for their help all weekend, just gutted I didn’t get the results we deserved for the effort they all put in.

Onwards and upwards to Knockhill for Round 3 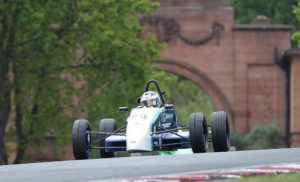