Qualifying was a little disappointing as we lost time due to traffic on both my fast laps so we started further down the grid than we perhaps should have. In Testing on Friday we where right on the pace so to end up only P6 left work to do in Race 1 to say the least

Race 1 was good, we made a good start and got up passed Luke Cooper and were just as fast as James Roe in front if not a little faster in the beginning, unfortunately we got held up by back markers and lost time to James and then struggled with the handling of the car in the last laps allowing Josh to put some pressure on us till the end. P4 in the end was a good finish and we showed good pace in the opening laps to stay with the leading group so Race 2 was looking good.

Race 2 the start wasn’t as good as we lost out to Josh Fischer, we where much quicker as every time he got a break in traffic I caught him within a lap but his experience helped him ensure I never got a chance to get passed and I was really just wanting another strong points finish so trying a risky move to get in front wasn’t on the cards.

Race 3 was disappointing as I got tangled up in Jake Byrne’s incident in front of me which forced me off the road and well out of the top 10, however I worked my way passed a few cars quickly up to P7 and then got stuck behind David Mcarthur, every time I tried to pass he put me on the grass, that’s how the nose got damaged as he practically brake tested me coming out of graham hill and I had nowhere to go but into the back of him.

So I guess Race 3 was frustrating to say the least as I had better pace than eventual race winner Luke Cooper all weekend so a top 3 would have been on the cards for sure if I hadn’t gotten caught up in an incident on the opening lap that had nothing to do with me.

Overall it was a great start to the year as we collected solid points in all 3 races which was the aim going into round 1, we also showed our speed during testing that turned a few heads to say the least.

Looking forward to Oulton Park in a few weeks time for round 2! 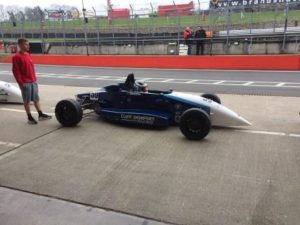