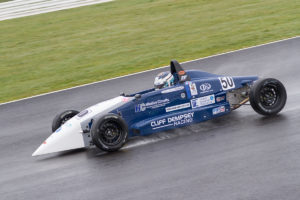 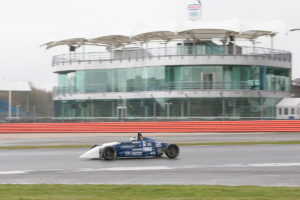 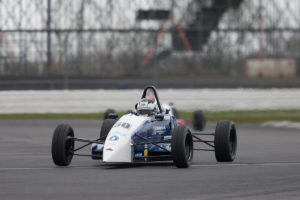 Qualifying:
An ever drying track made the opening 5 minutes of the session vital, initially I sat on Pole position for Race 1 and continued to improve with every lap. Being first across the line proved costly as I encountered slower traffic on the lap that mattered most. Having to overtake 3 cars on my quickest lap cost me valuable tenths and with the rain beginning to fall again my chances of a front row start were washed away. By the time the field had completed their laps I had fallen down the order to 8th and was never able to improve. This result did not reflect the true performance of the new Ray GR18 chassis and meant I had work to do in Race 1.

Race 1:
During the opening laps of the race I was able to carve my way through the field into 4th and began a race long battle with Josh Fisher for that position. We swapped positions lap after lap on the semi dry track but ultimately I had to settle for 5th across the line, the race pace I had was very strong and the higher grid position for Race 2 meant I was still in the hunt for the opening race on Sunday morning.

Race 2:
Another strong opening lap and decisive move off the back straight allowed me to climb up to 4th by the end of lap 1. The car was mega in the opening laps as I continually challenged for 3rd and pulled away with the leading group. Unfortunately the strong start was unraveled as an engine issue left me a sitting duck on all 3 straights causing me to tumble down the order to 17th. The problem cleared slightly in the closing laps and allowed me to charge back through to 11th at the flag despite still carrying a significant straight line speed disadvantage. In the closing laps I was also setting times good enough for a podium which underlines just how strong the car was despite the engine issues.

Race 3:
Starting down in 11th place made the opening laps exciting to say the least as I battled up to 5th. With a slightly sick engine making life difficult on the straights 5th was as far as I could progress, despite some late lunges in the closing laps I was never quite close enough to mount a proper challenge and finished in a train of 4 cars all within touching distance of 2nd place.

Overall it was a solid weekend, taking two top 5 finishes despite starting further back in the field is encouraging and the new Ray GR18 chassis was fantastic all weekend in both the wet and dry conditions.
Cant wait to head North up to Knockhill, Scotland for Round 2 next month.

A huge thank you to everyone at Cliff Dempsey Racing for their hard work over the weekend, and to my sponsors; Mr Neep, Hindley Circuits, JTS Construction, WST Graphic Art and Irridian Industrial Electronics for the continued support!