The Border Reivers 2018 Ray GR18 Formula Ford was picked up on Monday by Cliff Dempsey Racing from the Raysport International workshop, everyone was very excited to see the new car for the first time, preseason testing will begin shortly in the build up to the first round of the National Championship at Silverstone on March 31st – 1st April. 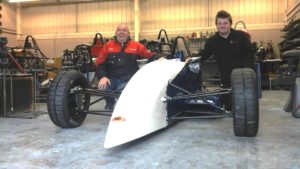